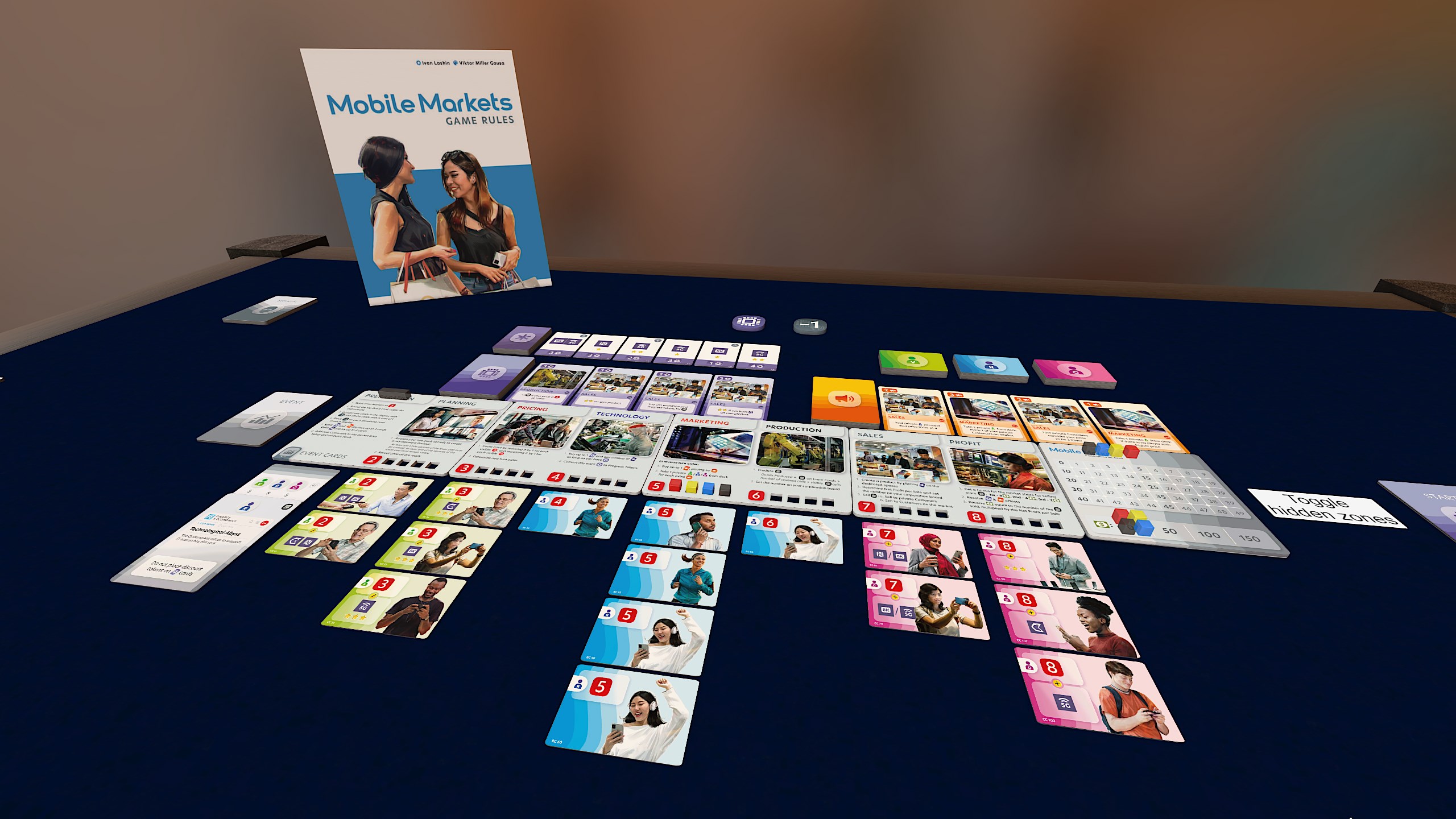 Two years later, the game has over 3000 ratings with a comfortable score of 7.7 on BGG. Smartphone Inc was a very successful game, which means only one thing to come, a sequel. Three years later, Mobile Markets: A Smartphone Inc. Game released symbolically at Essen 2021.

With the power of Tabletop Simulator, I had the pleasure of playing digitally two times at the two-player count. I have also played Smartphone Inc which, I enjoyed, but what did I think of the sequel?

Mobile Markets A Big Brain Game In a Small Box

Mobile Markets follows the trend of Bruxelles 1897, where you take the core of your original game and distill it into an impactful small card-based game. I own Bruxelles 1897 and think it is one of the best card games to date. I have not played the original version of the game.

Both games share the same hidden resource selection, where you overlay two tiles (pads), then all players reveal. What you show will determine your resources that round. This mechanic has great depth within its simplicity as your resources are locked, excluding goods.

Therefore you have to consider every phase of a round, in which there are 7 phases after tile planning. Creating a nail-biting decision as you have to figure out both your own and your opponent’s potential choices. In Mobile Market, there are no improvement tiles that you find in the original, so the playing field is even.

This planning section creates the best ah-ha and oh no emotional reactions from players around the table. As you have done all your calculations but, there is a chance your opponent saw something you missed, or they outplayed you.

The Customers Are Mobile

Customers in Smartphone Inc are static, in the form of area control. However, the customers in this game are dynamic and variable in both desires and the amount that comes out. This significant change is the best adjustment they have made.

Every round a set amount of green, blue, and pink customer cards are drawn. These customers direct the product you will build to maximize your selling potential. It also influences the price you choose to sell your product, adding another layer to the player interaction.

The change from static to dynamic customers cement Mobile Market as a different game. The customer variability pair better with the hidden resource selection and, it enhances the tactics you need to employ.

The Price is Right

Pricing your product every round correctly in Mobile Market is vital to victory. You’ll be counting up all the customers who bought your product and then multiple it by the price you set. In turn, this will earn you money or in, euro terms, victory points.

Other than points and resource generation to consider, you must be aware that the price you pick will also determine player order. Wow, this is incredibly punishing if you price wrongly and wonderfully rewarding if you price right.

Why is it so punishing and rewarding? Well, whoever goes first sells to the customers first, meaning that you have to price competitively and intelligently. You get bonus points for selling your product to the most customers and, you are reducing the number of customers in the market.

The Little Engine That Sold Phones

The key to your engine comes in the shape of cardboard rectangles that improve your tech, add features to your phone, and bolster your marketing potential. Or as the rule book would say, Technologies, Features, and Marketing.

These tech cards will make the engine purr, as having the right tech will open up new ways to earn victory points, addition feature slots, marketing bonuses, and end-game victory points. Investing in tech is both a strategic and tactical endeavor.

Calculating which tech to buy is very important as you only get one per round. These cards bolster your selling power, good(s) production, marketing skills, and more. Tech cards are engaging and permanent features, so you better pick the right one.

However, there is a high chance you will compete with your opponents as pricing properly is the main conflict point. Because whoever prices lowest get the early tech. Therefore, sacrificing points in round three might net you more points the following round.

Unlike techs, you can buy as many features as you want, which creates a very fierce and heated draft phase. In a two-player game, you can hate draft to prevent your opponent from selling to the same or their private customers.

As a result, this can create a devastating round for your opponent(s), and unless there’s a duplicate, they will lose out on that feature. Leading to some mean situations, but it feels necessary at times.

Hate drafting will be less noticeable at a higher player count due to more customers that are available. Let me know in the comments below what your experience is like.

Marketing To Your Audience

Once you have your tech and features sorted, now is time to focus on marketing. These cards allow you to specialize in customer groups. So you can maximize your score and minimize the loss of customers due to player orders.

Marketing cards buffer your main engine as they allow you to acquire private customers that will only buy your product. They also broaden your appeal to customer groups. Therefore pair your features with the right customers to score the most.

This strategy will be in the back of your mind as you build your engine as a feature-rich product is nothing without its customers to buy your product. Therefore if none of the cards appeal to you, acquire private customers to bolster your score multiplier.

They built this game intending to be a smaller Smartphone Inc which they 100% succeeded there. They made enough changes to make it different it stands out on its own by changing the customers.

The customers are variable which, appeals to tactically minded players as it introduces flexibility within the overarching engine building. I enjoyed gauging what customers to sell to and how to price according to other players.

This game will still appeal to the math-minded folk who love to grind those numbers, and due to the variables, it makes the calculations lengthier and heavier.

The game comes in a smaller box and, it plays in roughly the same amount of time. Pair this with what I have already said and, this game is better than Smartphone Inc. But if you own Smartphone Inc, don’t go throwing it out because that game is still fantastic and, you should own both. 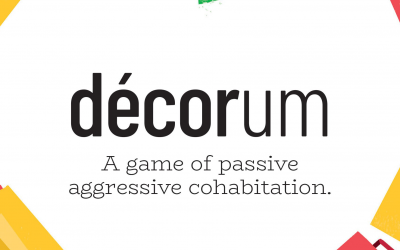 Do you and your partner argue a lot about what color the curtains should be or why is the sofa facing 45 degrees when... 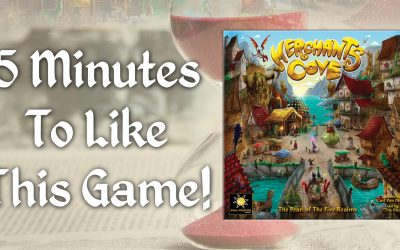